On Finding Your People 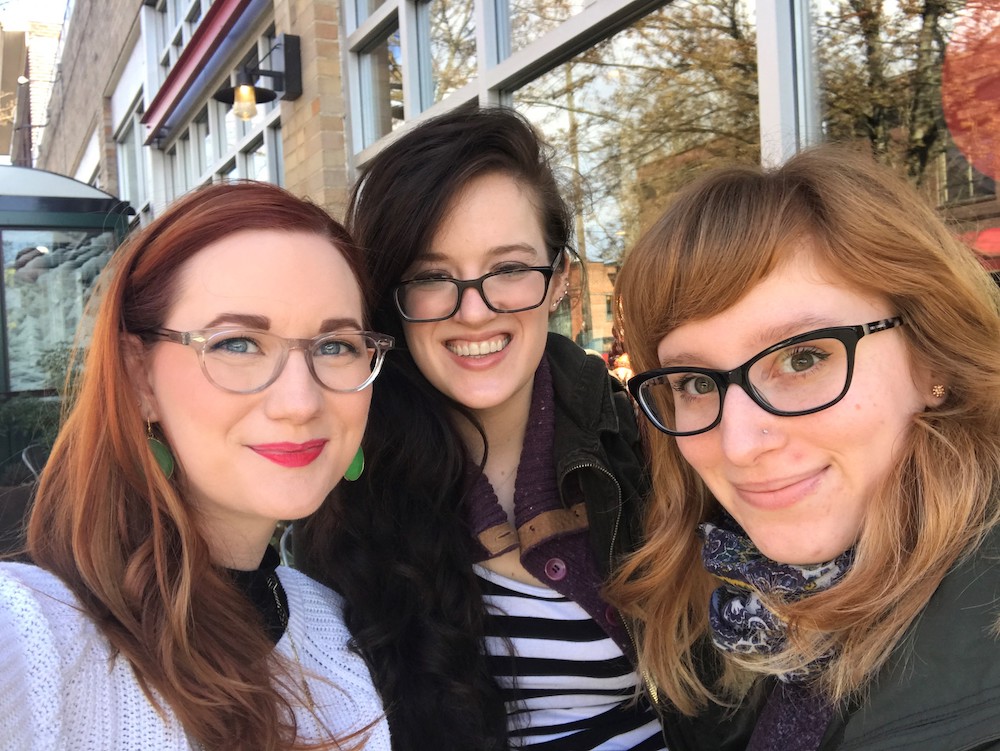 Last week I tweeted this:

I've said it before & I'll say it again: find your people. The ones who lift you up & get your work. They're worth their weight in gold.

The thing is, if I had read that tweet a year and a half ago, my reaction would have been "that's great, but how do I find them?"

So, I'm going to tell you how I found mine because I'm not exaggerating when I say I had ZERO writing friends for years. Absolutely none. And I have NO IDEA how I made it through those years without them.

Last year, in January of 2016, one of my resolutions for the year was to put myself out there so I could meet other writers. I was tired of being lonely in my writing life, and I desperately craved a community with other writers.

I remembered two writers I'd met online during a Spring writing bootcamp years earlier, so I reached out to them and we started chatting. One of them introduced me to Rachel Solomon, another redheaded Seattle-area YA writer, and Rachel became my first writer friend who I talked to regularly and met up with in person. Rachel is also the person who told me about Pitch Wars, and I still get stressed out when I think about how close I was to never learning about that contest. Rach and I became fast friends, and so many wonderful things have come from this friendship. And all because I had a friend who knew Rachel on Twitter.

So yeah, let's talk about Twitter. Full disclosure: I didn't like Twitter and had zero interest in getting involved. But Twitter is a GREAT tool for meeting other writers. There are writing challenges, writing bootcamps, and contests that happen on Twitter. The YA community is especially active on Twitter, so it's a great place to start. I'd had a Twitter account for years but never used it, and last year I started being active in hopes of meeting other writers, and it's been great for that. (If you're like me and don't love the idea of Twitter, get started by using lists and following people you actually want to follow. That'll help turn down the noise and keep you connected to the people you care about. Once I started doing that, I was able to enjoy Twitter more.)

The next big thing I did was sign up for Camp NaNoWriMo in April. I'd never done it before, but I saw people chatting about it on Twitter (see, it all comes back to Twitter) and decided to sign up. Camp NaNoWriMo has an option to join a cabin, which I HIGHLY recommend doing. Someone in my Twitter feed said they'd started a YA cabin, I asked to join, and just like that I met 12 new YA writers, several of whom became friends of mine.

Then came Pitch Wars. Pitch Wars was HUGE for me. I *almost* didn't enter because I was nervous about how public of a contest it was, but there was such an active Pitch Wars community on, you guessed it, Twitter, that I knew I had to enter. Plus, this was the year of putting myself out there, so I decided to take the plunge. I entered with several of my cabin mates from Camp NaNoWriMo, and we all got in! But the incredible thing about Pitch Wars is that even if you don't get in, you've become part of the community. Jump on the hashtag, swap queries and first chapters with other hopefuls, and introduce yourself. I promise you'll meet a ton of wonderful people! I met my first real CP through this contest and now we talk almost every day. She's a lifeline for me and I have no idea how I wrote without CPs before this. She changed my writing life, for sure. And don't even get me started on my mentor, Heather, who instantly became one of my people, someone I could not imagine my life without now. (Also, *whispers* Heather and I are co-mentoring in Pitch Wars this year... just saying.)

Okay, enough gushing about Pitch Wars. I realize that everything I've mentioned so far has been online, because that's where I had the most luck. My people, the writers who lift me up and get my work and support me... I met them online first. But I did try some in person things with varying successes.

First, I learned about a Barnes and Noble Teen Buzz event on Twitter (HAHAHAHAHA), and one was happening at my local store, so I decided to go. I met eight local YA authors, all of who were wonderfully kind and encouraging. I stayed in touch with several of the authors I met there (through Twitter, obviously) and started having coffee dates with some and even went on to become agent sisters with another.

I had mixed luck with other things. I took a writing class, but it ended up being made up of people who mostly hadn't started writing yet. I tried to find some beta readers and ended up giving my manuscript to a few people who missed the "constructive" part of constructive criticism, and in turn, ended up ripping my writing apart (lesson learned: if you think you might be a good CP or beta match with someone, swap a query or first chapter to begin with, just to make sure you ARE a good fit). I looked for local writing groups on meetup.com, but that never yielded anything.

The important thing, though, is that I kept at it. I kept putting myself out there, even after failed attempts and harsh feedback and tons of insecurity. And I'm so glad I did, because I've met some of the most incredible, supportive people I could have ever hoped for.

And if you're still unsure about the whole Twitter thing, you can come say hi to me @TimesNewRachel – I promise I'll be super nice.

Writer friends, how did you find your people?

Pitch Wars 2020 Wishlist
How I Outline and Set Up a New Project in Scrivener
My Write Path
Somewhere Between Yes and No: the R&R
How to Write Yourself an Edit Letter
Announcing: Be Your Own Mentor